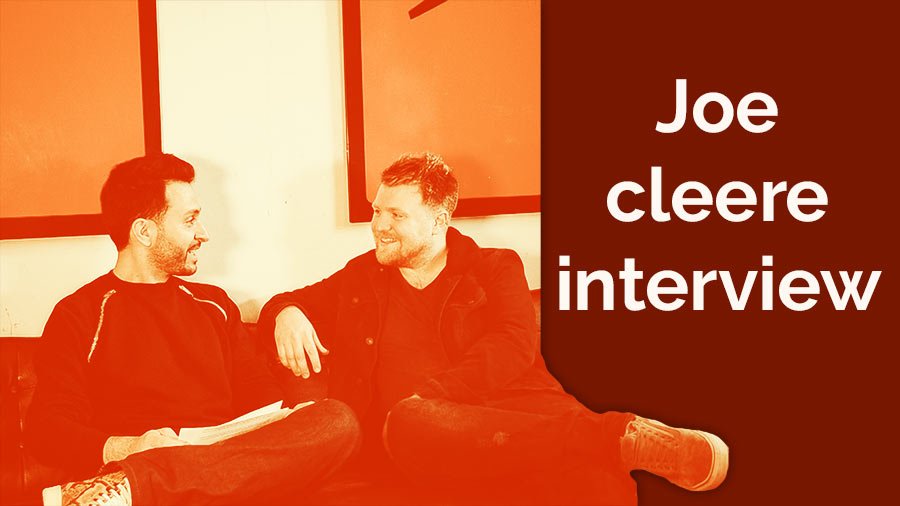 We’ve met Joe Cleere in Tileyard Studios (London) and had an interesting chat about his experience as singer/songwriter, the projects he’s been involved with and his advice for up-and-coming artists looking to make it in the music industry as professional musicians.

— Watch the video or read the transcription below —

Max: Hi everyone, it’s Max from Sonic Crew. I would like to welcome you to our interview with Joe Cleere.

Joe: Hey, how are you doing?

Max: Very good Joe, how are you doing?

Max: We’re in Tileyard Studios in London tonight, there is a fantastic event about to kick off organised by Tileyard Music, Sofar Sounds and Youth Music. You’re performing with SONDR tonight. Just to give a little background SONDR is a production duo signed by Ultra. The song you’ve recorded with them “Surviving” has amassed already in excess of 16M plays on Spotify. How did this collaboration come about?

Joe: So basically it’s kind of a twofold thing really. I was on my own on this project under Joe Cleere and then we had all the different collaborations, DJs and production duos like with SONDR and also with Sam Feldt. When I came to Tileyard first, I came here as a singer-songwriter, basically writing songs for other artists. I remember really well, actually it was on a holiday and it was a really warm day. Everyone was off on holidays and the only people who were here in the whole of this massive complex of studios was me and the two guys of SONDR, YK and Lorenzo. So I toughened it up, as beginners, you know, trying to get something done. So we got in the studio and wrote this really cool song called Surviving, which like you said now has 16M streams on Spotify. So we just, we kind of kicked immediately on the writing but we liked the song so much that we actually didn’t let it go. ‘Cause lots of people wanted it and we said no, we’re going to do this ourselves and we’re really glad that we did now.

Max: Good. I was actually about to ask you about the collaboration with Sam Feldt. And the other one you’ve done with Mosimann as well.

Max: I mean, both songs sound amazing. I just wanted to ask you, how do you get ready to record in the studio? What do you do to prepare yourself, to go and perform in a recording session?

Joe: Well, yeah. This is kind of an interesting one. I suppose everyone has their own method of doing things. For me, the first thing I do, I learn the song inside out. But then there’s a big difference between singing a song in time and in tune and actually performing it. I think the performance is almost like acting it that you have to get into the character, you’ve got to get into the emotions ‘cause that’s what we do, it’s emotion communication, communicating part of yourself, part of your soul, and hope that somebody else will feel what you’re saying and relate to it. So the first thing you do really is geting into character trying to see: what are the feelings and what am I trying to say? What’s the story?

Max: Is it different when you prepare for a live performance instead?

Joe: Well, it’s slightly different. Live for me is all about getting that emotional connection but also even a bit more energy ‘cause I always like to feel like if you’re performing live that, basically, even if you are on your own you’re still a band. Because the other members of the band are the audience. They’re performing, whether they’re clapping, cheering or singing along they’re with you so you need to perform with them and kind of manage that dynamic. Whereas in the studio is slightly different, you know, you’re basically telling the story and just the story.

Max: Ok, cool. There is something I wanted to ask you. I spoke about your vocals, how good they are and how much I like them. I was curious to ask you whether there’s any artist you looked up to growing up or anyone who had an influence and helped you shape up your vocal style.

Joe: I mean, like everybody I listened to a lot of different acts growing up. For me, like in every facet was, for guitar I listened to Jimi Hendrix and for writing lyrics I was listening to Neil Young and John Lennon. For vocals I loved Rod Stewart or Kelly Jones – Stereophonics, elements of U2 – Bono and elements of Coldplay – Chris Martin. Just amazing storytellers, they can tell a story with their voice in so many facets, so many different parts, using the different parts of the throat, singing from the chest, you kind of borrow and steal lots of different things and in the end you find your own way.

Max: If you had to give advice to someone who’s moving the first steps into the music industry, trying to make it as a professional singer, what that advice would be?

Joe: Ohhh! It’s tough! You know, sometimes you do things right and you don’t know how you did them right or what you did different. For me I think, if you’re going to be a singer, learn how to write as well as, that’s a really awesome tool to have.

Max: I think as a musician you should be able to do different things as everything complements the other things.

Joe: Exactly. You need to be open-minded to different sounds, to workin with different people, taking on different points of view. I think the biggest piece of advice as well is: don’t get downhearted because everything in the music industry gets to 99% and then it doesn’t happen. So there’s a good chance that if you take too much of the criticism on board you might get crushed by it. Just take it with a pinch of salt and try and enjoy yourself. If you’re not having fun, nobody is.

Max: Ok Joe, if I want to find out more about you, where do I find you online?

Joe: It’s very easy, go to Twitter @JoeCleere or you can find me on my Facebook which is https://www.facebook.com/joecleereofficial

What Do You Play?